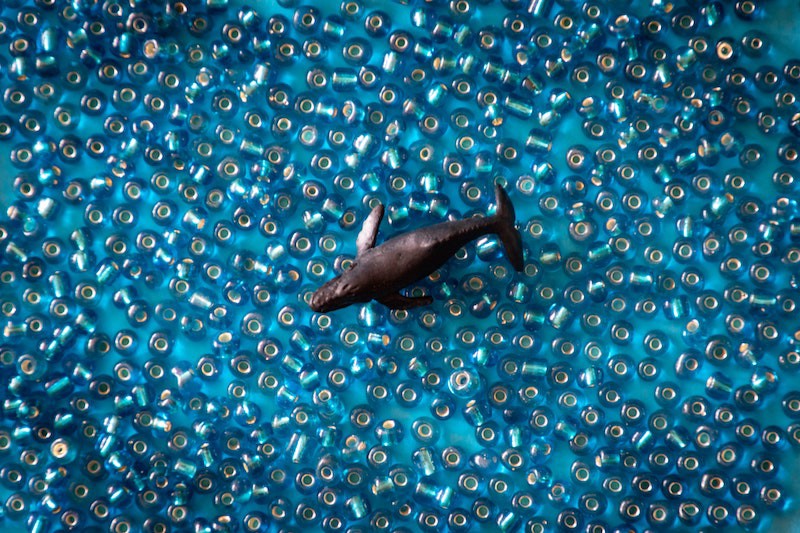 This part is about dealing with more than two Docker containers. You will come to a point eventually when you have so many containers to manage it feels unmanageable. You can only keep typing docker run to a certain point, as soon as you start spinning up multiple containers it just hurts your head and your fingers. To solve this we have Docker Compose.

TLDR; Docker Compose is a huge topic, for that reason this article is split into two parts. In this part, we will describe why Docker Compose and show when it shines. In the second part on Docker Compose we will cover more advanced topics like Environment Variables, Volumes and Databases.

In this part we will cover:

Using Docker and containerization is about breaking apart a monolith into microservices. Throughout this series, we will learn to master Docker and all its commands. Sooner or later you will want to take your containers to a production environment. That environment is usually the Cloud. When you feel you've got enough Docker experience have a look at these links to see how Docker can be used in the Cloud as well:

##Why Docker Compose Docker Compose is meant to be used when we need to manage many services independently. What we are describing is something called a microservice architecture.

We should maybe have started with the question of why we want this architecture? It's clear from the properties listed above that it offers a lot of flexibility, it has less to no dependencies and so on. That sounds like all good things, so is that the new architecture that all apps should have?

As always it depends. There are some criteria where Microservices will shine as opposed to a Monolithic architecture such as:

There are a ton more arguments on why Micro services over Monolithic architecture. The interested reader is urged to have a look at the following link .

###The case for Docker Compose The description of a Microservice architecture tells us that we need a bunch of services organized around business capabilities. Furthermore, they need to be independently deployable and we need to be able to use different tech stacks and many more things. In my opinion, this sounds like Docker would be a great fit generally. The reason we are making a case for Docker Compose over Docker is simply the sheer size of it. If we have more than two containers the amount of commands we need to type suddenly grows in a linear way. Let's explain in the next section what features Docker Compose have that makes it scale so well when the number of services increase.

##Docker Compose features overview Now Docker Compose enables us to scale really well in the sense that we can easily build several images at once, start several containers and many more things. A complete listing of features is as follows:

As we can see it takes care of everything we could possibly need when we need to manage a microservice architecture consisting of many services.

##When plain Docker isn't enough anymore Let's recap on how Docker operates and what commands we need and let's see where that takes us when we add a service or two.

To dockerize something, we know that we need to:

Now, using Docker Compose we still need to do the part with the Dockerfile but Docker Compose will take care of building the images and managing the containers. Let's illustrate what the commands might look like with plain Docker:

Now that's not a terrible amount to write, but imagine you have three different services you need to do this for, then it suddenly becomes six commands and then you have the tear down which is two more commands and, that doesn't really scale.

##Docker compose in action Ok so at this point we understand that Docker Compose can take care of pretty much anything we can do on the command line and that it also relies on a file docker-compose.yaml to know what actions to carry out.

###Authoring a docker-compose.yml file Let's actually try to create such a file and let's give it some instructions. First, though let's do a quick review of a typical projects file structure. Below we have a project consisting of two services, each having their own directory. Each directory has a Dockerfile that contains instructions on how to build a service.

Now, it actually matters what you specify here. Currently, Docker supports three different major versions. 3 is the latest major version, read more here how the different versions differ, cause they do support different functionality and the syntax might even differ between them Docker versions offical docs Next up let's define our services:

Ok, that was a lot at once, let's break it down:

All this corresponds to the following two commands:

Well, it's almost true, we haven't exactly told Docker Compose yet to carry out the building of the image or to create and run a container. Let's learn how to do that starting with how to build an image:

The above will build every single service you have specified in docker-compose.yaml. Let's look at the output of our command: 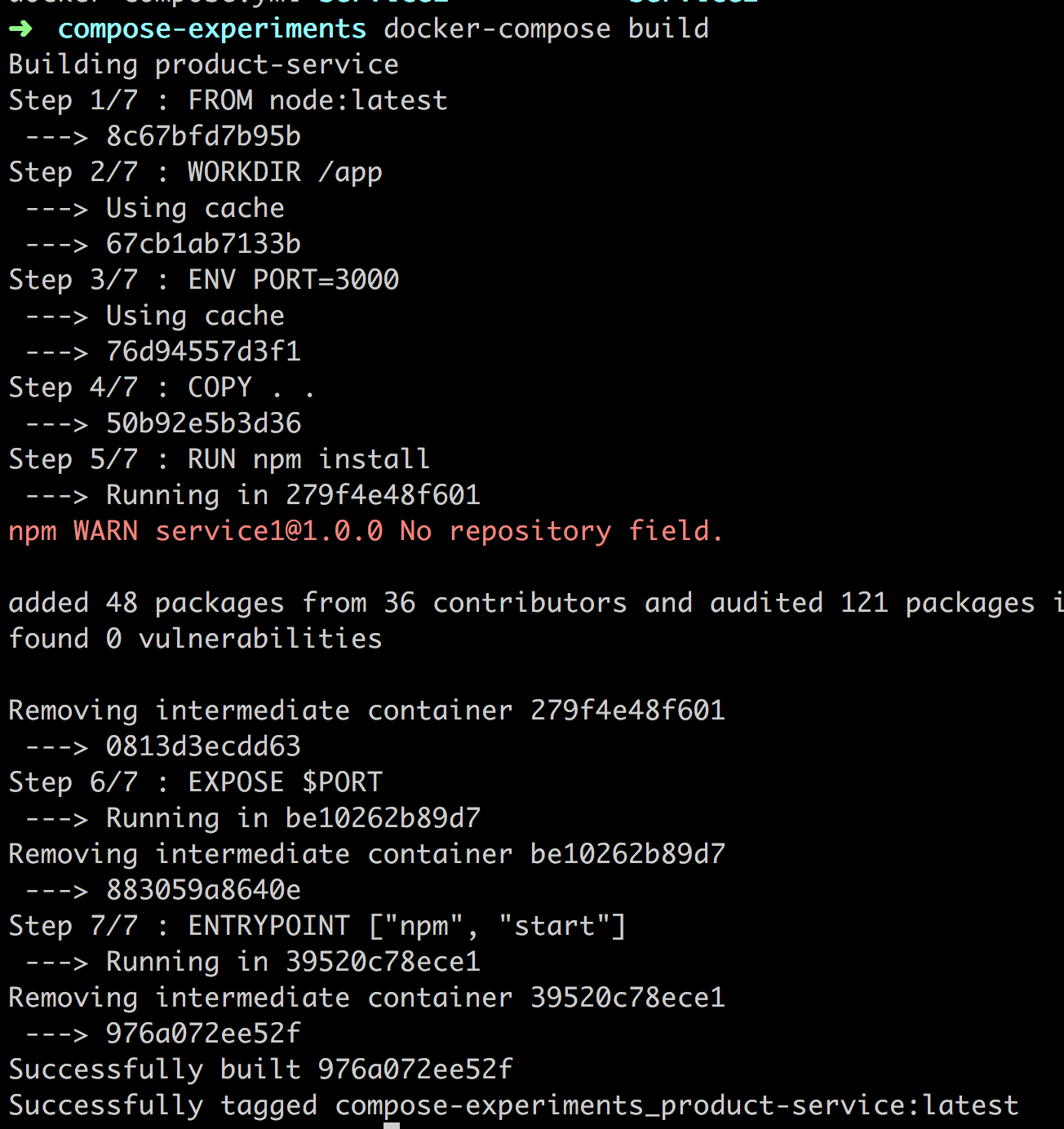 Above we can see that our image is being built and we also see it is given the full name compose-experiments_product-service:latest, as indicated by the last row. The name is derived from the directory we are in, that is compose-experiments and the other part is the name we give the service in the docker-compose.yaml file. Ok as for spinning it up we type:

This will again read our docker-compose.yaml file but this time it will create and run a container. Let's also make sure we run our container in the background so we add the flag -d, so full command is now:

Ok, above we can see that our service is being created. Let's run docker ps to verify the status of our newly created container: It seems to be up and running on port 8000. Let's verify: Ok, so went to the terminal and we can see we got a container. We know we can bring it down with either docker stop or docker kill but let's do it the docker-compose way:

As we can see above the logs is saying that it is stopping and removing the container, it seems to be doing both docker stop [id] and docker rm [id] for us, sweet 😃 It should be said if all we want to do is stop the containers we can do so with:

I don't know about you but at this point, I'm ready to stop using docker build, docker run, docker stop and docker rm. Docker compose seems to take care of the full life cycle 😃

##Docker compose showing off Let's do a small recap so far. Docker compose takes care of the full life cycle of managing services for us. Let's try to list the most used Docker commands and what the corresponding command in Docker Compose would look like:

The above in itself is pretty great but what's even greater is how easy it is to keep on expanding our solution and add more and more services to it.

##Building out our solution Let's add another service, just to see how easy it is and how well it scales. We need to do the following:

Let's have a look at our docker-compose.yaml file and let's add the necessary info for our next service:

Ok then, let's get these containers up and running, including our new service:

Wait, aren't you supposed to run docker-compose build ? Well, actually we don't need to docker-compose up does it all for us, building images, creating and running containers.

##Summary Here is where we need to put a stop to the first half of covering Docker Compose, otherwise it would just be too much. We have been able to cover the motivation behind Docker Compose and we got a lightweight explanation to Microservice architecture. Furthermore, we talked about Docker versus Docker Compose and finally, we were able to contrast and compare the Docker Compose command to plain Docker commands. Thereby we hopefully were able to show how much easier it is to use Docker Compose and specify all your services in a docker-compose.yaml file. We did say that there was much more to Docker Compose like Environment variables, Networks, and Databases but that will come in the next part.